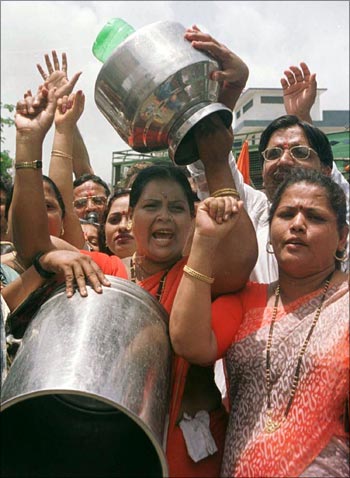 The irony will not have missed newspaper readers, who are informed on one day that the Central government will guarantee service delivery, to give effect to a citizen's charter, while on another day the Maharashtra government announces that no water connections will be given to new high-rise buildings for a couple of years -- even if the buildings have been approved by the civic authorities.

Without a water connection, no building gets a completion certificate -- so hundreds, if not thousands, of flats will lie built and unused till the state government feels it can supply water.

In 2012, Mumbai hopes to get substantial additional water from the Middle Vaitarana project, but the deadline is not sacrosanct and so the wait could be longer. 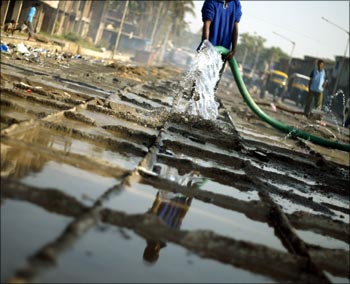 Image: A labourer sprays water on a concrete road at a construction site in Mumbai.
Photographs: Prashanth Vishwanathan/Reuters

For Mumbai, which has long since given up its old self-belief that it is the country's premier metropolis, and where the majority of residents struggle without basic civic amenities, this will come as further proof of the dysfunctionality of the governing apparatus.

For there can be no doubt that citizens are being made the scapegoats for what is a government failure to make water available.

The government will plead that the problem is the result of the monsoons having failed this year. Perhaps, but Mumbai's water shortage is not new.

The fact is that Indian cities could manage better with the available water if there were efficient management, and less waste. The problem of inadequate supply is compounded by waste because public taps are perennially leaky. 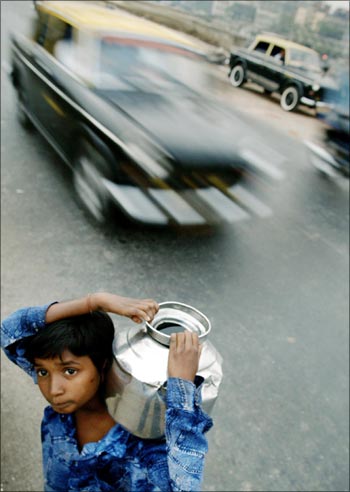 Private consumption too is profligate because the civic authorities refuse to charge for the true cost of water (well over Rs 10 per kilolitre); Delhi has just announced a near trebling of water rates, but even that may not be enough.

Mumbai needs a third more than the 3,350 million litres of water that it gets. The 455 million litres that the Middle Vaitarana project will provide, on completion in 2012, will not be enough to fill the gap. Bear in mind that 650 million litres are currently stolen or wasted.

The problem which the whole country needs to focus on is that India is on its way to a water crisis, in its cities as well as in its villages (the water table in states like Punjab has plunged to great depths). 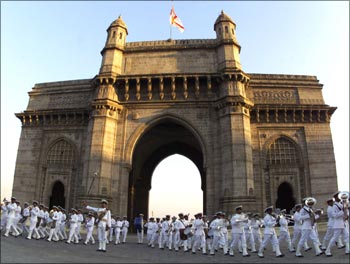 Image: Cadets from the Naval Band play military music at the Gateway of India in Mumbai.
Photographs: Reuters

There has to be a new culture of using water frugally, and of recycling water. The chief minister has already announced that rainwater harvesting and recycling of water will be made mandatory by April.

The Brihanmumbai Municipal Corporation has been told to come up with plans for desalination in six months. Chennai, for example, was plagued by severe water shortages but is seen to have mitigated it through rainwater harvesting and desalination. Mumbai can afford to pay for desalinated water at Rs 5 per litre.

So why did Mumbai delay taking action till the situation reached crisis proportions?