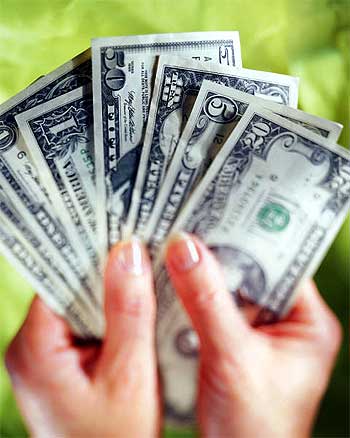 In the world of foreign exchange, currency trading is the name of the game. The term 'top currencies' is subjective and depends on the method used to trade and the investor's risk tolerance. Strictly speaking, there is no 'best' or 'top' currency, but there certainly are currencies that are the most profitable to trade in.

For a forex trader the most important thing to profit from the currency exchange business is know which are the best currencies to trade in. The best way of judging currencies is by finding out how they are performing in the foreign exchange market: the turnover and liquidity of the currency traded are to be considered while arriving at a conclusion.

Forex markets are the trading places where businesses, individuals and banks trade currencies and earn from their investments. There are three major foreign exchange markets: the United States, Asia and Europe.

Recently, top-10-list.org drew up a list of 10 best currencies of the world. The selection of the 'best' currencies was made on the basis of trading volumes of the currencies at the three principle forex markets.

For the record, the Indian rupee does not figure among the top 10 currencies, although some economists hold that it and the Chinese yuan might soon take over from the US dollar. Till that happens, here are the world's top 10 currencies:

The US dollar is the most dominant currency unit today, despite its decline and shakiness in the recent past. In fact, all currencies are measured using the US dollar as the standard. In quantified terms, about 90 per cent of transactions worldwide involve the US dollar.

At present, the US dollar remains the world's foremost reserve currency.

The US dollar has been adopted and in some cases used as the official currency in many different territories and countries.

This process of using one country currency in a different economy is called 'dollarization'. 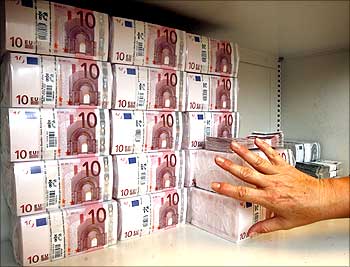 The euro is the official currency of 16 of the 27 member states of the European Union. It accounts for almost 37 per cent of the daily transactions in the Forex market, according to a report.

The currency is also used in five European countries whereas over 175 million people across the globe use currencies which are pegged to the euro, including more than 150 million people in Africa.

Based on 2008 figures, the Eurozone is the world's second largest economy. 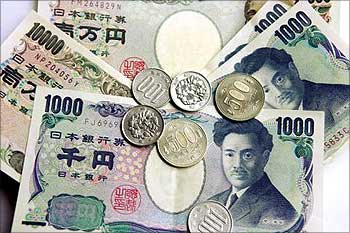 The Japanese Yen takes the third spot among the most heavily traded currencies. About 20 per cent of the daily transactions in the forex market involve the Japanese Yen.

The word yen stands for 'round object' in Japanese.

The yen was officially adopted by Japan's Meiji government in an Act signed on May 10, 1871. The new currency was  introduced in July of that year. 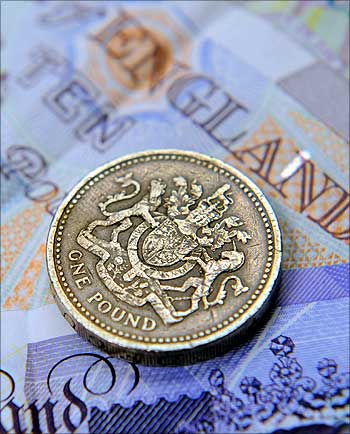 Image: A one pound coin and sterling notes are seen in central London.
Photographs: Toby Melville/Reuters

The British pound, on most occasions, is measured up against the US dollar. It accounts for 17 per cent of the daily Forex transactions.

The official name of the currency is pound sterling. It is used mainly in formal contexts and also when necessary to distinguish the United Kingdom currency from other currencies bearing the same name. 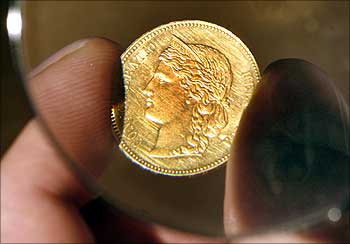 Image: A man holds a golden 20 Swiss francs coin, printed in 1895, under a magnifier in Zurich.
Photographs: Arnd Wiegmann/Reuters

The Swiss Franc makes in to the round of top 5 most heavily traded currencies in the forex market.

About 6 per cent of the daily transactions in the forex market involve the Swiss franc.

The franc is the currency and legal tender of Switzerland and Liechtenstein as also in the Italian exclave Campione d'Italia.

The Swiss franc is the only version of the franc still issued in Europe.

In the first half of the 19th century, the Swiss Franc was unregulated and considered a highly complicated currency.

Before regulations were imposed in 1850 by the Swiss Federal Constitution, the country had 75 entities and 25 cantons, all producing their own coins. 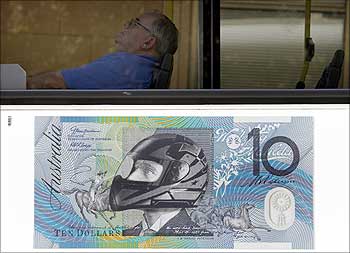 Image: A man sleeps in a bus decorated with an advertisement in central Sydney.
Photographs: Daniel Munoz/Reuters

The Australian dollar takes the number 6 spot in the list accounting for over 4 per cent of all transactions done in the Forex market.

The Australian dollar was popular with currency traders because of high interest rates in Australia.

In 1965, then Australian Prime Minister Robert Menzies wished to name the currency 'royal'.

The prime minister came up with various other suggestions -- austral, oz, boomer, roo, kanga, emu, digger, kwid, dinkum and the ming (after his nickname).

The name 'royal' got almost finalised and trial designs were prepared and printed by the Reserve Bank of Australia. But the prime minister's choice of currency name was not approved by the people and was later dropped in favour of the dollar. 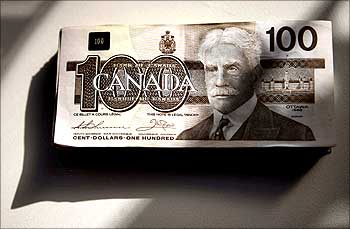 Symbol of C$ is used to distinguish it from other dollar-denominated currencies.

Following the war of 1812, first paper money, the British Army Bills, were issued in Canada in dollar denominations.

In 1817, the Montreal Bank issued the first banknotes.

In 2000, the Bank of Canada stopped issuing $1,000 notes and began to withdraw them from circulation, to counter  money laundering. 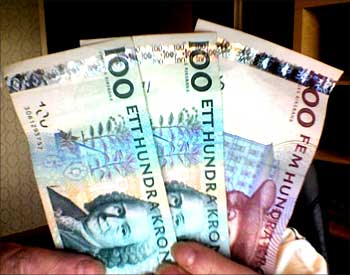 The krona has been the currency of Sweden since 1873. The word 'Krone' means crown in English.

It is locally abbreviated kr. The plural form is krono. 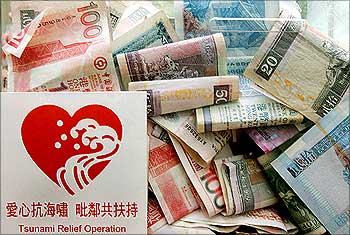 In English, it is normally abbreviated with the dollar sign $, or alternatively HK$ to distinguish it from other dollar currencies.

When Hong Kong was established as a free trading port in 1841, there was no local currency in everyday circulation. Various foreign currencies, including Indian rupees, used to be the popular means of transaction. 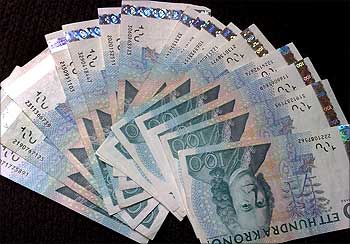 The plural form is kroner.

The krone was introduced in 1875, replacing the Norwegian speciedaler at a rate of 4 kroner = 1 speciedaler. In doing so, Norway joined the Scandinavian Monetary Union, established in 1873.