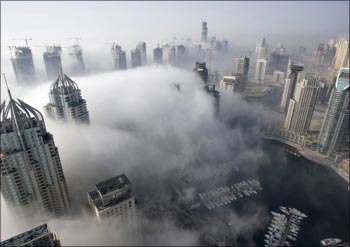 The fear of government-owned Dubai World reneging on its commitments to global lenders is expected to find an echo in a reversal of a recent tentative recovery in Dubai's real estate values unless the emirate manages to strike some sort of deal with creditors and / or somehow raises the cash to meet its obligations, analysts and industry professionals said on Sunday.

The ports, property and hospitality conglomerate last Wednesday asked its creditors for a six-month standstill period while it restructures its debt obligations. Dubai World has borrowed $59 billion to finance its expansion, including the acquisition of port, retail and leisure assets and the setting up real estate ventures globally.

"Unless there is some agreement with creditors on the $10 billion or so that is due in the next two months, I see an indirect perceptional impact on property values in Dubai, maybe even sending them spiralling downward again," said Ashutosh Maitra, one of the partners at a Dubai-based property marketing firm.

This would have a direct impact on the Indian investors in the emirate's real estate sector, who constitute the largest number of property buyers followed by Britons. In real terms, however, such an impact would further push back the possibility of a profitable exit.

An economist attached to an asset management firm at the Dubai International Financial Centre, or DIFC, added: "Such an impact is only likely if there is no quick resolution to the Dubai World crisis. And frankly, this seems to be a storm in a teacup. Dubai World is not seeking to renege on obligations, it is simply asking for some time out from paying off the interest while it restructures its commitments."

By the middle of this year, property values had fallen by about 65 per cent in peak advertised prices since September 2008, when a delayed reaction to the global credit crunch hit the market. According to HSBC data, May 2009 saw a slight uptick in agreed prices month on month, indicating signs of recovery. The lender said distressed stock was gradually clearing due to renewed interest as well as some repricing by sellers. "Anecdotal evidence also suggests that foreign investors seem to be back in the market and there are bulk buyers of property for investment purposes," HSBC said.

The research arm of HC Securities said the main catalyst of an uptick is credit returning to the market as mortgage providers raised their loan-to-value ratios, relaxed credit norms and lowered rates in line with a downward trend in the Emirates Inter-Bank Offer Rate, or Eibor, which fell from 3.87 per cent in January to 1.95 per cent in October.

After dropping to a two-year low of seven per cent and six per cent, mortgage values and volumes as a percentage of total transactions have since steadily recovered to pre-crisis levels, reaching 24 per cent and 14 per cent, respectively, in October. Mortgage volumes have also recorded a strong growth, reaching a two-year high of 374 units in August, as prices drop to attractive levels, only to back-pedal to 191 units in October.

However, a number of factors are likely to keep the recovery fragile. According to HC Securities' own research, 60,000 residential units are likely to hit the market between 2009 and 2011, putting further pressure on prices.

At the same time, rental returns will continue to stagnate or fall marginally as uncertainty over the business environment keeps the expatriate population lower than in recent years. Several rounds of lay-offs by large and small corporations have resulted in rents in most parts of Dubai coming under intense pressure in the past 18 months, making property investments less attractive than they used to be in the glory days of 2002 to 2007, when so-called "flippers" -- investors who bought property with a 10 per cent down payment, only to sell it one or two months later for a 100 per cent return on investment -- made massive amounts of cash.

Asking rentals in Dubai have retreated for 10 months in succession since the start of the year, dropping more than 40 per cent year to date. Occupancy levels have been driven down by expatriates leaving and new stock coming into the market. The pace of the decline, however, seems to be slowing, according to HC Securities, with rent values declining only two per cent month-on-month in September and October.

Advertised rentals on agreed sale prices resulted in yields that are higher, upwards of 10 per cent in October. Considering there is a large bid/ask spread on prices, HC Securities believes rentals are no different and estimates that agreed rental yields have compressed from a high of 8.6 per cent in November 2008 to around 5.7 per cent in October 2009.

On the other hand, this is making life easier for tenants, who now have the upper hand in negotiating down their monthly rents. Over the past four months, there has been a large population shift from the traditionally low-rent areas of Dubai into the relatively upper-crust areas where rents have suddenly become more affordable.

Any quick recovery in realty values driven by massive foreign capital, as witnessed in the boom years, will be predicated on global fund managers allocating larger amounts to the Dubai and UAE markets. "I don't see that happening very quickly," said the DIFC-based economist, who refused to be named. "Primary fund flows will be allocated to more developed markets like New York and London -- where there is an established secondary market that facilitates an exit, and where transparent data shows a clear bottoming out. I believe only the high-risk hot money like hedge funds will be allocated to emerging markets."

Also, other real estate opportunities in the Arabian Gulf itself are looking more attractive, according to several property consultancies such as Jones Lang Lasalle and Colliers. One of them is Dubai's own neighbour, the oil-rich UAE capital city of Abu Dhabi, where severe residential and commercial property shortages are keeping prices and rental yields high.

"If the Dubai World debt imbroglio results in pushing property prices down again, it will be seen as the start of the double-dip in that sector. Since perception is everything these days, the worry is the double-dip will result in a W-shaped overall economic recovery for the emirate," said the DIFC-based economist. This would be bad news for real estate buyers in Dubai, who will witness their investments eroding even more before recovering.

"These worries would prove unfounded, however, if the Abu Dhabi Government or the Federal Government takes a hand in helping out the Dubai Government, as they have done on two occasions in the past," he said.

Indian IT exports not to be hit by Dubai crisis