News
Business
Movies
Sports
Cricket
Get Ahead
Money Tips
Shopping
Sign in  |  Create a Rediffmail account
Rediff.com  » Business » Where are we in the recovery?

Where are we in the recovery?

By Renu Kohli
October 13, 2009 16:42 IST
An indication that consumer incomes are stabilising is visible in the demand for residential housing, writes Renu Kohli.

With plenty of green shoots now scattered across the economy, the critical policy question is, how sustainable is the rebound? Is the recovery built upon short-term foundations, dependent upon government and central bank support? Or, has the growth baton passed from the public to the private sector, which can walk without crutches? 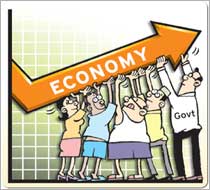 Difficult to answer. Yet the distinction between the impact of public spending - a temporary growth driver - on private demand and a self-sustaining revival predicated upon rising incomes and employment, holds the key for setting macroeconomic policies in the second round. How do we answer these questions?

As the temporary effects of government spending peter out, an economic resurgence that can be maintained beyond the near term must rest upon independent, domestic private demand as exports will continue to subtract from growth for some time.

In turn, a continuous growth in private demand requires a reliable expansion in consumer spending as unused capacity, future uncertainty and lagged responses limit the need for business spending.

Private consumption is indeed on a sustained rebound since the last three quarters; sequentially, growth was 5.3 per cent and 6.4 per cent on a seasonally adjusted, annualised basis over the last two quarters, while year-on-year growth rose 2.4 per cent and 2.7 per cent, admittedly more subdued.

An indication that consumer incomes are stabilising is visible in the demand for residential housing, lending for which is income-based in India; this is reportedly reviving as property prices have bottomed out.

Both lenders and builders confirm restoration from the demand and supply sides. State Bank of India is targeting a growth of 30 per cent in the current quarter (21 per cent in 2008-09), while HDFC's home loan disbursals has risen 22 per cent in the first quarter; major lenders expect continuation of this trend in the next quarter too. Builders are also expecting better sales in the two forthcoming quarters.

The question, however, is whether this is a temporary spurt or consumer demand has revived sufficiently to retain its upward climb in the quarters ahead? Is it driven by government incentives, lump-sum payments of salary arrears or have consumer incomes recovered sufficiently from the double whammy of price and financial-cum-confidence shocks of 2008 to support future increases in output?

The answer to this question really lies in the job market. For employment growth, which will support consumer incomes, must resume to extend and continue the consumer momentum for self-perpetuating demand to propel growth in the next stage of economic revival.

As not much information exists about labour market movements at higher frequencies in India, anecdotal and fragmented evidence must do the job. To start with, the labor bureau's survey for the April-June period reported that employment in non-exporting units increased slightly, viz, contractual jobs rose in the metals and automobiles sectors.

Since then, there are reports of a thaw as well as a tilt in the job market: firms are reported to have recommenced hiring in the past three-four months, variable pay components are being restored by many firms, existing job vacancies are being filled up after almost a year, and bargaining power of employees is returning as witnessed by negotiations of higher salary hikes and renegotiation of existing contracts.

Headhunting firms also report an upswing in hiring across all levels over the last three months, actual and intent, due to improving corporate profitability and liquidity, and the re-emergence of India onto the international investors' map.

A fuller picture will emerge soon with the arrival of corporate results for the September quarter. But preliminary reviews indicate that operating margins have also been boosted by a revival in demand - net sales - in addition to cost-savings, despite price hikes by manufacturers to offset the increase in input costs.

Balance sheet details might further confirm the improvements in the job market, endorsing the continued growth in spending ahead. Contrastingly, corporate earnings in the previous quarters were driven by higher productivity (falling employment) and lower input prices.

Tentative as these signs be, they suggest that the strong bounce-back in industrial production - an average 7.4 per cent (y-o-y) in June-July against the 1.1 per cent average for January-May - has led to some closure of the circle of rising output, employment and incomes, the resumption of which is needed to confirm a self-dependent demand recovery. Of course, the circle will close completely only with the resurgence of the exporting sector.

Aggregate demand will continue to be supported as the capital spending portion of the fiscal stimulus comes on-stream. A Business Standard analysis of order book announcements of 63 companies reports a 21 per cent increase in July-September over the same period of the previous year; the bulk of these originates from public sector undertakings and Central and state governments.

And one-third of the 30 initial public offer filings are by real estate and infrastructure companies. These trends confirm that the fiscal stimulus constituent aimed at boosting long-term productivity has started kicking in too.

What do these trends signify for setting macroeconomic policies in the next stage? The main inferences are relevant for monetary policy as most of the fiscal support measures like duty cuts et cetera are temporary and will cease by March 2010 anyway, especially if the GST is implemented from April 1, 2010.

Monetary policy, however, has to evaluate the growth-inflation tradeoffs and decide whether continuation of the extraordinary monetary loosening is needed to nurture the "green shoots".

A pertinent question at this point is: Has the monetary loosening led to a surge in lending? Answer: Not so far. But non-bank financing is buoyant and firms are lining up to raise equity financing.

The author was, until recently, with the IMF

All you wanted to know about GST

No plan to borrow; we can give money to IMF: PM