News
Business
Movies
Sports
Cricket
Get Ahead
Money Tips
Shopping
Sign in  |  Create a Rediffmail account
Rediff.com  » Business » Why is inflation in India so stubbornly high

Why is inflation in India so stubbornly high

We may not know the diagnosis but the Reserve Bank of India has administered, and has no choice but to administer, the only cure it knows: tighten monetary policy by raising interest rates and squeezing liquidity. Even if the cure works, and especially if it does only partially, it is critical to understand the underlying disease. 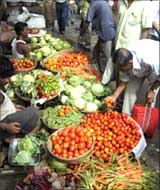 Leave aside the long-standing debates about the appropriate measurement of inflation. We know that consumer price inflation has been close to or above double digits for nearly two years, and the more cyclically sensitive wholesale price index, after dipping into deflation territory last year, has been steadily rising to surpass double digits.

The puzzle is simply this: why is inflation in India so stubbornly high and so much higher than other emerging markets, even those that are supposedly overheating, such as China, Korea and Indonesia, where inflation is closer to 3 per cent?

The second explanation is what we might call policy shock. Prices of fuel have recently been increased, which is contributing to overall price inflation. Minimum support prices for agriculture have also been increasing. Further, in the face of agricultural supply shocks, price smoothing by the government through greater imports and faster depletion of domestic stocks has been woefully inadequate.

In some ways, the more plausible these explanations are, the less worrying the prospects for the Indian economy. The monsoon is looking better this year, so the agricultural shock factor will not have the same bite going forward. And fuel price increases should be of a one-off nature rather than an ongoing source of inflation.

The most telling pieces of evidence against the view that inflation is supply shock and policy-driven are twofold. High inflation, especially consumer price inflation, predated the monsoon shock of last year.

In this case, we are forced to turn to the third standard, and more worrying, explanation, namely that inflation also reflects overheating: the supply capacity of the economy is simply unable to match the demands on that capacity.

Now, overheating in India can be an agricultural phenomenon or an economy-wide pathology. In either case, there is cause for worry because the implication is that the economy's current growth rate of 7-8 per cent is above its potential or trend growth rate.

In this view, and unless capacity can be significantly increased, attaining China-type double-digit growth rates will remain elusive.

In agriculture, it seems easy to identify the causes of overheating because a scissors effect seems to be at work. On the one hand, productivity growth, especially in pulses, is anaemic and possibly weakening further. On the other hand, purchasing power and hence demand are accelerating, courtesy the NREGS (which is increasingly looking like a pure cash-transfer programme).

We do not know for sure what the bottlenecks are in the rest of the economy. They could be inadequate investment in infrastructure, inadequate supplies of skilled labour (always a possibility in India because its growth model is so skills-reliant), slow total factor productivity growth or some combination of all the three.

Regardless, these constraints - as indeed those in agriculture - are not addressed very quickly. So, even if faster growth is possible, it will not be immediately achievable.

And a corollary is that, given the capacity situation, aggressive monetary policy action will be warranted to bring inflation below 5 per cent, which is believed to be the "Lakshman Rekha" that politicians dare cross only at their own peril.

There may, however, be another explanation of high and persistent inflation that is more cheering in suggesting that inflation is less due to overheating than due to a different type of cost-push inflation. Here's a possible hypothesis.

But suppose that these micro-distortions interact with macroeconomic factors such as surging capital inflows into real estate and housing. Such surges will lead to sudden increases in the price of land and related inputs, raising the cost of production in the economy as a whole.

A whole range of services, such as retail, construction, entertainment, education and finance - which account for progressively larger shares of the economy  use significant amounts of land as an input, a fact that gets overlooked in inflation discussions, which tend to focus on agriculture and manufacturing (this may also explain why inflation in consumer prices, which reflect services to a greater extent than wholesale prices, has tended to be above wholesale price inflation).

Generalised cost-push inflation could then be a natural consequence with the push resulting from the interaction between a pre-existing microeconomic distortion and a macroeconomic factor that serves to aggravate this distortion, converting a price-level effect into an inflation effect.

If this is the diagnosis, what is the cure? Clearly, the first best solution is to eliminate the distortions in the land market of which there are many, including urban land ceiling and tenancy laws.

The resulting boost to productivity would increase the overall supply capacity of the economy, making inflation less likely. Structural reforms of the land market will thus be good for inflation and good for growth.

But if land market reforms are infeasible, and inflation continues to be above acceptable levels, policy-makers may have little choice but to address the macroeconomic factors that aggravate the underlying distortion.

In some cases, this may require dampening foreign capital flows, especially those going to real estate and housing; or they may involve other prudential measures such as higher provisioning requirements for real-estate lending.

Thus, the diagnosis of and cures for inflation may need some rethinking. Inflation may have a lot more to do with services and land as an input. And curing it may require addressing the macroeconomic aggravators of microeconomic distortions in addition to traditional monetary policies. Exceptionalism characterises India's development pattern, but does it also apply to the nature of its inflation?

The author is senior fellow, Peterson Institute for International Economics and Center for Global Development