News
Business
Movies
Sports
Cricket
Get Ahead
Money Tips
Shopping
Sign in  |  Create a Rediffmail account
Rediff.com  » Business » What Geithner should and should not do

What Geithner should and should not do 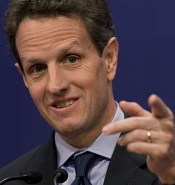 Post-crisis US has little standing in trumpeting the benefits of financial sector deregulation, let alone in pushing the interests of its maligned financial sector, says Arvind Subramanian.

The US Treasury Secretary, Tim Geithner, is off to India to launch the new bilateral economic dialogue focused on macroeconomic stability, financial markets and infrastructure financing.

Geithner has a long association with India where he spent some of his childhood in the 1980s as the son of a Ford Foundation officer. This trip will have three objectives.

First and foremost, the trip is about symbolism, aimed at establishing a parallelism with the US-China relationship that has been institutionalised as a high-level strategic and economic dialogue.

The US-India economic relationship does not quite have the importance of the US-China relationship - at least not yet - but this new initiative will ensure that India does not fall under the radar screen. So, this trip is significant just for the fact that it is happening and will, hopefully, continue to happen.

Second, Geithner will - or should - be seeking to find areas of common global economic interest. India is now a member of the G-20, though there are no burning economic issues either dividing or uniting the two countries.

India, for example, does not have a lot at stake in reform of the financial sector because domestically the problem is not one of how to re-regulate the sector (which is the case for the United States and Europe) but how and how fast to deregulate it.

But there is one potentially big issue of common interest - the Chinese exchange rate. As I have argued in the pages of the Financial Times, China's undervalued exchange rate affects emerging market countries such as India even more than it does the US.

So, there is potential disaffection that could be tapped by the US to forge a multilateral solution to the problem. India, for example, has a lot of anti-dumping cases against China reflecting the competitiveness concerns of Indian industry.

There are two problems that Geithner will have to deal with, however. India will probably not want to be seen as criticising, or ganging up on, China. (As a senior Indian official told me: "Let the big boys sort this out amongst themselves. We live in a rough neighbourhood").

Some skillful and soft diplomacy will be required to bring India on board. The aim should be to perhaps raise this issue in the G-20 (or the WTO) as something of common concern to all G-20 members and not just the US.

Another problem relates to the nature of Geithner's interlocutors. The effect of the Chinese exchange rate is felt the most by domestic industry and by the Indian central bank, which has to deal with a surge in capital flows and hence manage the exchange rate at a time when the Chinese currency has been depreciating.

But Geithner's counterparts, mostly from the ministries of finance and planning, have less of a stake in the exchange rate and thus are less likely to respond to any renminbi-related overtures. His challenge will be to meet and mobilise that section of Indian opinion that is most exercised about the exchange rate.

The presence of Don Kohn, vice chairman of the Board of Governors of the Federal Reserve, could, therefore, be useful as it would lead to interaction with the Reserve Bank of India. India's commerce minister should also be brought into the renminbi-related discussions as his constituency - Indian industry - is a key victim of the undervalued Chinese currency.

The third objective of this trip for Geithner is to promote business opportunities for the US, especially in the financial sector. The Indian financial sector remains heavily regulated and there is a strong perception within India that deregulation is important particularly to mobilise finance for the vast needs of the infrastructure sector (estimated at close to a trillion dollars).

There are many domestically conceived blueprints for financial sector reform. The problem is one of navigating the politics of reform especially given the presence of the large public sector banks in India. The US advocacy of this effort can only taint, and even set back, the reform effort.

Related News: Reserve Bank of India, Tim Geithner, G-20, Board of Governors of the Federal Reserve, US
Print this article