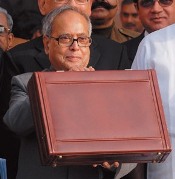 Pranab Mukherjee will have to stay lucky if he is to climb the big mountain that lies ahead, says T N Ninan.

Pranab Mukherjee is like the kind of general that Napoleon wanted, a lucky man. He has come out smelling of roses because he has done the most important thing in the Budget, and fulfilled his promise made last July.

He has reduced the fiscal deficit to 5.5 per cent of GDP- an announcement that immediately woke up the stock market from its stupor, at high noon on Budget day.

But he has been able to deliver, and that too without breaking a sweat, only because he has had most unusual good fortune on his side - in the form of a series of one-time benefits that, cumulatively, make for what can only be considered a windfall. It is important to understand this if one is to anticipate what now lies ahead.

The finance minister has managed to slash the fiscal deficit for next year by 1.4 per cent of GDP (from 6.9 per cent to 5.5 per cent) because he has got benefits in as many as five different ways.

By a magical equivalence, that is almost exactly the reduction in the deficit, of 1.4 per cent of GDP (which is projected at Rs 69.35 lakh crore for next year).

Such heaven-sent gifts don't get handed to finance ministers every year, which is why Mr Mukherjee has grabbed the chance offered by the Finance Commission to lower expectations for the future.

Even if he delivers on those targets, it would have taken us seven long years to undo the fiscal damage caused by the "stimulus" of the last couple of years. And even then, the debt-GDP ratio would be higher, and so (therefore) would the share of revenue eaten up by interest payments.

If the situation had to return fully to what it was before the financial crisis, it might take us a full decade. All those in love with fiscal stimuli, please note that goodies from the government don't come cheap; at some point, we have to pay.

To understand the costs involved, the deterioration in government finances, and the long uphill climb that lies ahead, compare the numbers for next year with what prevailed in the year before the crisis, ie 2007-08. In the three years between then and 2010-11 (as budgeted, with a 5.5 per cent deficit), the central government's tax revenue would have gone up by 21.5 per cent. But expenditure would have gone up by 55.6 per cent.

The result is that an extra 4.8 per cent of revenue will be eaten up by interest payments on the additional debt, which amounts to Rs 32,750 crore (Rs 327.50 billion) in a year -enough perhaps to pay for 8,000 MW of additional power capacity. That, as it happens, may be the new capacity that we will add next year in the public sector.

That's because capital expenditure financed out of the Budget has increased by only 26.9 per cent, while revenue expenditure has gone up by 61.3 per cent. This is the fiscal cost of taking care of those at the bottom of the pyramid, through the rural employment guarantee programme, providing for the building up of human capital, and so on.

In a poor country, the expenditure is unexceptionable, indeed necessary, provided the money is spent well - and there lies the rub. If the money is spent wastefully, or misdirected and the poor don't benefit, then the Budget has been ruined for no good reason.

Whether the money is spent well or badly, the fisc has to be brought back into balance.

And there is only one way to square what looks like a circle - ensure revenue buoyancy. The fact is that, even next year, tax revenue as a share of GDP will be only 10.8 per cent, well short of the 12.5 per cent that prevailed before the crisis. Taking the number back up by 1.8 percentage points (or Rs 1,20,000 crore!) will take some doing, and need time.

The only hope of achieving this quickly is through the proposed introduction of an integrated goods and services tax next year, along with the simultaneous spreading of the service tax net to include all services, which will bring more people into the tax net, and improve tax compliance. Mr Mukherjee will have to stay lucky if he is to climb the big mountain that lies ahead.