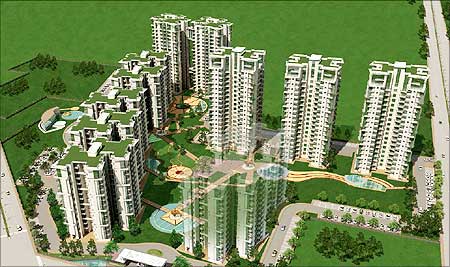 With the market for high-priced houses crashing, real estate developers are seeking a fortune in affordable housing and devising ways to keep the costs down.

You could call it the Nano effect. Battered and bruised by the slowdown, real estate developers have done a mid-course strategy correction and begun to offer low-cost and affordable houses.

DLF, Unitech, Jaypee, Omaxe and Tata Housing have all joined the bandwagon.

So far, the results have been encouraging. Jaypee, which launched 3,000 flats in a 70-acre residential project at Greater Noida, said it sold the entire stock in just one day.

Another Delhi developer, BPTP, said its 1,000-flat low-cost project at Faridabad got sold four times over. 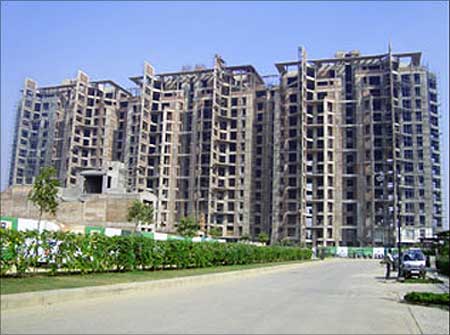 The economic slowdown accompanied by fears of joblessness, liquidity crunch and the stock market meltdown has crashed the market for expensive houses -- hence the rush to build low-cost houses.

Sceptics say it could be a stock market game -- once the slowdown is over, the same developers will revert to luxury projects. That may happen in the future.

At the moment, most developers are devising ways to cut costs which will help them come out with affordable houses.

How have developers come up with these low prices? What has helped them prune costs? 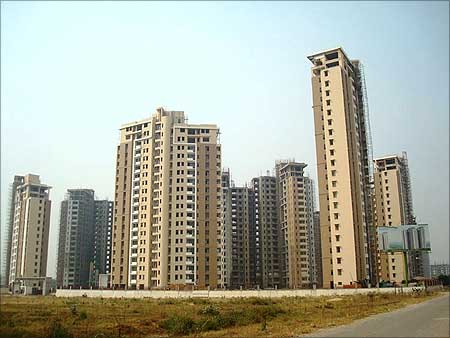 Houses till a year ago were priced high because land prices were high. It was, in fact, a vicious cycle -- developers paid high prices for land parcels because they were confident that there would be enough buyers even at high prices.

In the rush to acquire land, several developers went through intermediaries especially in villages close to cities. This was crucial as much development has happened in suburban sprawls like Gurgaon and Noida near Delhi.

Those who bought directly from the farmers seem to have had the last laugh. Though it took more time, they were able to keep their costs low -- Unitech, for instance.

The average cost of land for Unitech, according to Managing Director Sanjay Chandra, is just Rs 100 per square feet. In tony Gurgaon too, Chandra says his cost is Rs 120-130 per square feet. 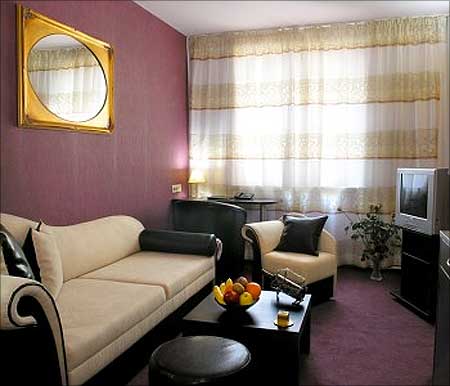 It will launch 40 mid-income and low-cost residential projects spread over 30 million square feet in 2009-10.

The company claims to have sold over 2,500 flats in the last three months.

It has also decided to change the portfolio of one of its biggest luxury projects, the Grande in Noida, to a mid-income housing project as the company sees no demand for luxury apartments in this market.

"We realised the changing dynamics of the residential market and changed our strategy accordingly. Earlier we were tapping only five per cent of the market which got saturated during the downturn," adds Chandra. 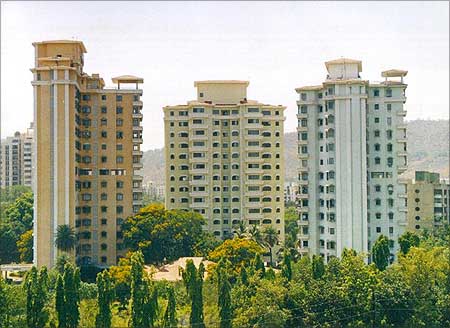 Tata Housing, on the other hand, is developing low-cost houses under joint development deals to save on land cost.

"To develop low-cost housing projects, one needs to find out ways to bring the cost of construction down. We have adopted the revenue-sharing model with the land owners so that we do not have to bid for land at exorbitant prices," says Tata Housing Managing Director Brotin Banerjee.

It is planning to launch more such projects by the end of this financial year in and around cities like Delhi, Bangalore, Chennai and Kolkata. The company is also in talks with the state governments to provide some relief on land prices. 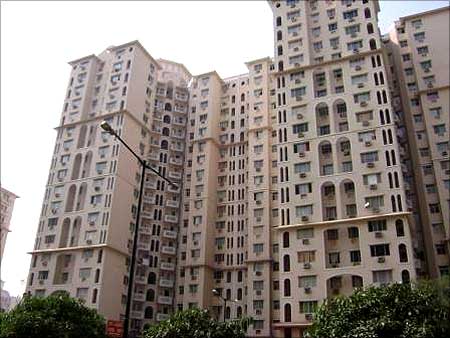 Still others have responded by bringing down the size of the apartments on sale.

DLF, the country's largest developer, too is changing its housing designs in Gurgaon to squeeze in more two-bedroom units. 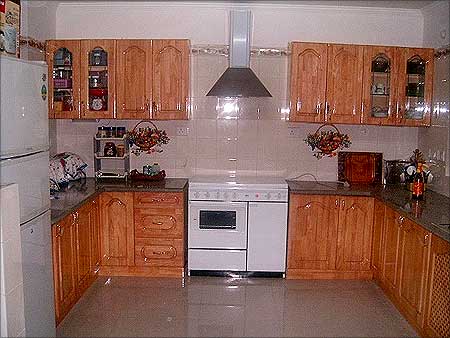 With houses getting smaller in size, to suit the pocket of the mid-income segment of the market, frills like modular kitchen, jacuzzi and wooden floors have also vanished.

Unitech, for instance, is laying vitrified tiles instead of expensive marble in its affordable housing projects, apart from cutting parking and basement space.

"The cheapest modular kitchen starts from Rs 70,000 and the developers were making profits on all the frills they provided to the customers. On an average, a developer charged Rs 400-500 per sq ft extra for providing furnished apartments," says Cushman & Wakefield Executive Director (development services) Ravindra Singh. "Now the developer offers a simple home to the buyer in which he can add the frills that suit his finances."

While others like Unitech, Ansal API and Omaxe import sanitary ware and fittings from countries such as China and Malaysia as these are 10-15 per cent cheaper than Indian products. 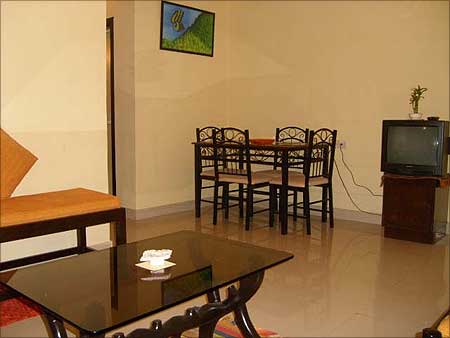 Image: A living room in a 1 BHK

With developers shifting their focus to low-cost housing, the era of high-rise buildings may soon become a thing of the past, until the demand for luxury housing bounces back.

Unitech thus has restricted the total floors in a building to three or four to save on construction costs.

"To come up with low-cost housing, developers will have to focus on two-storey apartments. As the height of the building goes up, the cost of construction goes up as well," says Omaxe Vice-president (finance) Sunil Malhotra.

Omaxe, to be sure, is targeting segments tapped never before by large developers. "We are targeting industrial workers who pay 30 to 40 per cent of their income on rentals. These people were never targeted before, but there was always a big market of such customers," adds Malhotra. 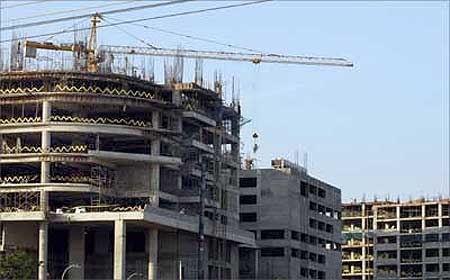 Image: Labourers work at a construction site on the outskirts of Hyderabad.
Photographs: Krishnendu Halder/Reuters

In the past few years, when the economy was booming, the prices of construction commodities like cement and steel had skyrocketed and this pushed construction costs up by 20-30 per cent.

The slowdown in the economy has helped cool the prices of construction material in the range of 10-15 per cent.

In the last few weeks, however, these prices have started climbing up once again. Many developers have also used the slowdown to slash the margins paid to contractors -- it is after all a buyer's market now.

What also helps is the measures announced by the government special interest rates for sub-Rs 20 lakh (Rs 2 million) home loans. 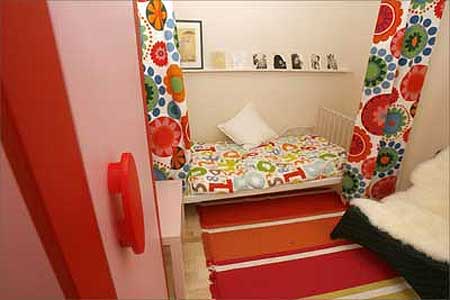 Image: A bedroom is seen in a showroom apartment.
Photographs: Nigel Roddis/Reuters

There are no firm estimates of the total number of such affordable flats on offer, but back-of-the-envelope calculations show that top developers such as DLF, Unitech, HDIL and others are planning over 55 million sq ft of new launches this financial year -- around 90 per cent of their total number of new projects.

According to a study by PropEquity Research, 74 per cent of residential apartment sales in Mumbai in the first quarter of 2009 came from the low-cost segment.

The trend was the same in Gurgaon and Chennai, too, where the corresponding numbers were 60 and 58 per cent respectively.

In all these cases, the apartment sizes were reduced and the average prices corrected 15-25 per cent, PropEquity data shows.