Without a market that is positively impressed with the finance minister's Budget, the government will face major problems in offloading its shares in PSUs and bring down its deficit, writes A K Bhattacharya.

Finance ministers do not often get to choose the day when they can present the Union Budget. Convention demands that they present the government's annual financial statement (that is what the Budget is all about!) on the last day of February. 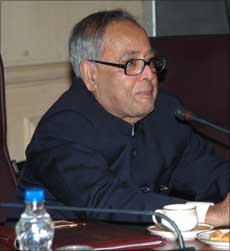 If the last day of February happens to be a Sunday, then the day of the Budget presentation is advanced by a day. And if Saturday is a public holiday, the Budget is presented a day before. That is precisely why Finance Minister Pranab Mukherjee is presenting his Budget for 2010-11 on Friday, February 26.

Indeed, finance ministers had the freedom to choose their day of Budget presentation only on 16 occasions since India's first finance minister, RK Shanmukham Chetty, presented his first full Budget on February 28, 1948. They could do so mostly because of elections requiring some more time before the newly-formed government could present the Budget. Thus, the convention of presenting Budgets on the last day of February got bypassed in those years.

An interesting fact is that most finance ministers, when given the freedom to choose the day of Budget presentation, have opted for a working day when the stock markets are open for trading.

VP Singh was an exception. He chose to present his first Budget, after the elections in December 1984, on a Saturday (March 16, 1985). Madhu Dandavate, too, had the option of choosing the day of presenting the Budget. He debated this issue for some time and finally settled for a Monday (March 19, 1990).

On five other occasions, when the finance minister could choose the big day, the Budgets were presented on a Monday, followed by four Budgets on a Wednesday, three on a Thursday and two on a Friday. It is clear that finance ministers, given a choice, would like the stock markets to remain open for as many days as possible after they present the Budget.

It is in this context one realises that Pranab Mukherjee is facing a unique situation. Never before in the last six decades has the presentation of a Budget been followed by three successive days when the stock markets have remained closed. So, after the stock markets' reaction to Mr Mukherjee's Budget on February 26, there will be a complete lull for three days as far as the markets' reaction to his Budget is concerned.

Now, this may be an opportunity, since the three-day lull will allow the finance minister to make amends by necessary policy clarifications in case the stock markets react adversely to his initial announcements on Friday. That, however, is a defensive approach to the issue and presupposes that Mr Mukherjee's Budget may contain some nasty surprises for the markets.

That also is the irony. This is one Budget where the success of the finance minister's fiscal policy strategy is hugely dependent on the markets. A revision in the base year for calculating gross domestic product and higher growth at 7.5 per cent for the current year may help him present a lower fiscal deficit at 6.2 per cent of GDP, almost the same as in 2008-09.

But in order to reduce the deficit further to 5.5 per cent of GDP in the coming year, he will have to bank heavily on proceeds from disinvestment of government equity in public sector undertakings.

Without a market that is positively impressed with the finance minister's Budget, the government will face major problems in offloading its shares in PSUs and bring down its deficit.

It is almost like a catch-22 situation. The markets are now increasingly under the influence of foreign institutional investors as their stake in India is on the rise. The markets' view, therefore, will strongly endorse a significant reduction in the government's fiscal deficit, even going beyond what the finance minister promised Parliament last year.

But to achieve a target of fiscal deficit lower than 5.5 per cent, the finance minister has to rely on either increased revenues from disinvestment or savings in public expenditure.

One sure way of impressing the markets would be to offer some fiscal concessions aimed at them. For instance, the finance minister could even consider reducing the burden of short-term capital gains tax on individuals and companies.

A friendly stock market response, therefore, is a critical ingredient for the success of Mr Mukherjee's Budget. If he does not reduce the fiscal deficit, the markets can turn negative. And if he does not do enough to impress the markets, his deficit targets will be in danger. Either way, therefore, expect a Budget that pleases the markets!